This week, I'm very busy rehearsing to be in National Theatre Wales's SOUL EXCHANGE, in which I play a 1930s nan from Butetown/Tiger Bay. It's a really interesting exsperience, meeting people from all walks (and runs, and sprints, and -in my case, stumbles - of life)! Specifically, I am working with an actress called Pauline who, a while back, co-wrote this pretty great film about the landing of The Windrush, the ship that brought the first immigrants from the West Indies to Britain. You can watch this here:

The Soul Exchange itself is the culmination of 2 years' work, researching into the history of the once-Tiger Bay, interviewing residents, collecting stories, and so forth. I have written a spoken word piece based on true incidents: basically, about a white woman (as I am!) who doesn't want her mixed-race grandson to be given a Muslim name... Can you guess what she does to achieve this??? Well, you'll have to come along if you want to find out...!! 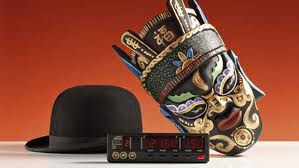 Hope to see you there!!!

FIND OUT MORE / BOOK TICKETS
Posted by Unknown at 16:48 No comments:

They sold up, separated, split
Found lines of work that seemed to fit
Them better than that one they used to follow

So, Grumpy works in a contact centre
Takes ten thousand calls a week

And Sleepy, well, Sleepy never
Seemed to find his happy ever
After, rather he just spends all his time asleep

In his dreams he reminisces
About the princess, and the kisses
That she lay like gold dust on his round and wrinkled head

Now that dust is lost and scattered
Hearts and mirrors, all have shattered
Snow white lies to broken ties and broken home have led

Better, then, to lie alone, a stone inside his bed

To close his eyes and fantasise, not weep, but sleep, instead.
Posted by Unknown at 05:09 No comments: